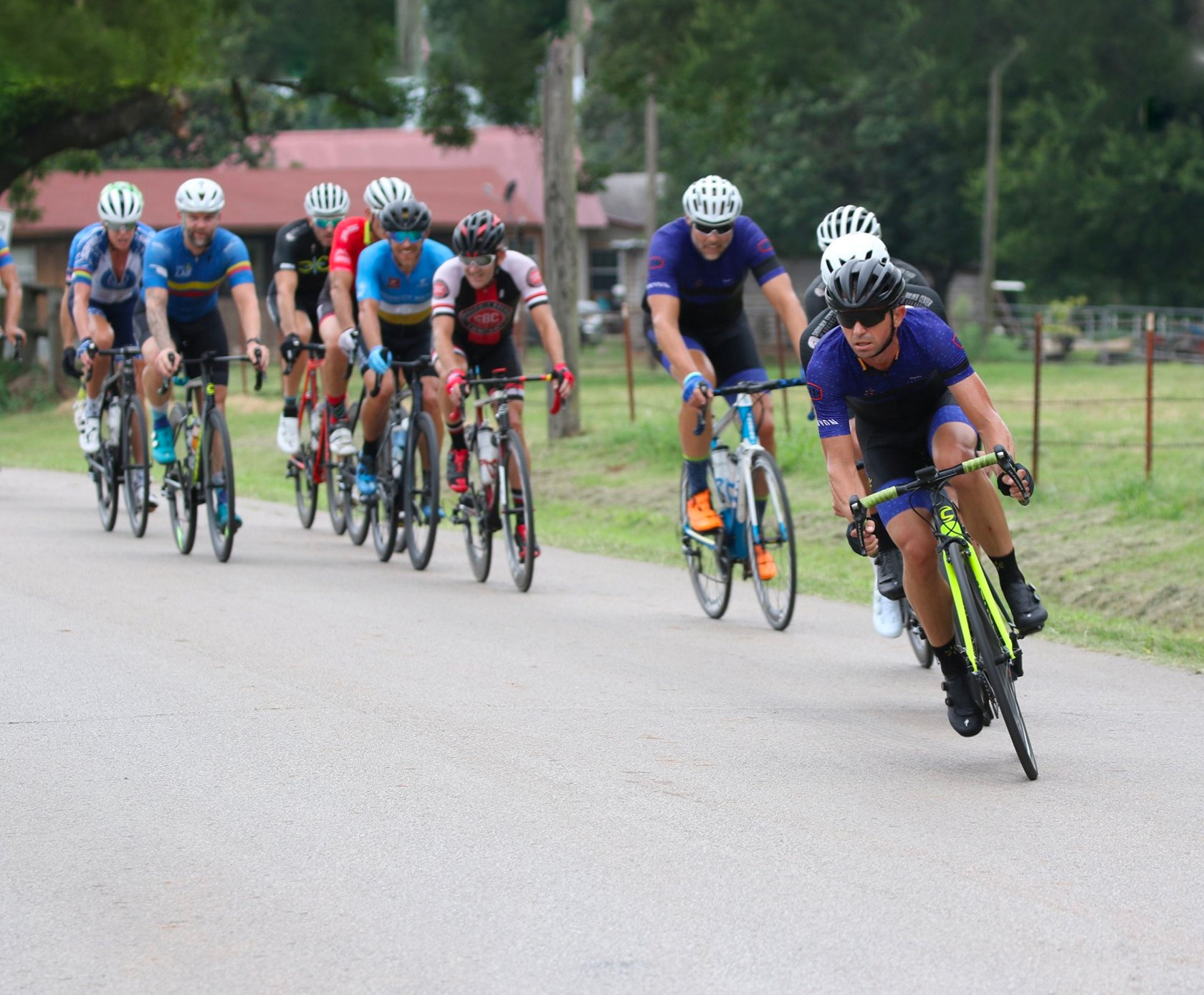 The Walmart / ACEC Cycling Team was born to promote fitness through cycling in NWA. We are a group of enthusiasts cyclist and professional racers participating in all the different disciplines cycling has to offer.

BMC is a cycling club located in and around Northwest Arkansas formed in 1979 by among others, the late Joe Martin. We are roadies, mountain bikers, tandem riders, tri-athletes, unicyclists, etc. We ride bicycles and that’s our “community”.

We are an entity that puts the majority of our energy into three things; riding, riding, and riding. If you’re into that, you’ll find plenty of others here in our group that you can share one of your favorite hobbies with.

For the obvious reasons, BMC expects all of its members to wear helmets on all group rides and act in a safe manner in accordance with local motor vehicle laws.

The starting line of the Fayetteville Spring Classic, now known as the Joe Martin Stage Race, can be traced back to the early ’70s when Joe Martin injured his knee in a skiing accident. Forced to give up his longtime hobby of running, Joe turned to cycling.

At the time, he and his wife, Nancy, lived in Norman, Okla., where Joe found a mentor who helped him build his bikes. He joined a team and started racing.

In 1977, the Martins moved to Fayetteville, where Joe had graduated college.

Joe decided to organize a race, and in a single year the race was up and rolling.

Low on staff, organizers relied on every spare hand to make the race happen. Quin Thompson, who manages the starting and finishing lines in the current races, remembers manning the corners as a young boy. He was responsible for keeping traffic off the race course, which meant refusing drivers entry to the downtown square.

On the corners of the downtown square, Quin got his first taste of competition. Already fond of bicycles, the speed and power of the machines and their riders was exhilarating.

At the time, Joe was promoting something very unusual. It was a sport international in scope, but there was limited coverage of cycling in the U.S.

For Quin, the Fayetteville Spring Classic “was an introduction to a whole new world.”

Most of Arkansas had yet to catch hold of the concept, much less the equipment, so Joe, who worked as a partner of the advertising agency Blackwood Martin, decided to open a fly-by-night bike shop.

“At the time, no one was carrying racing frames or anything like that,” explained Nancy Martin. In the days before the Internet, when information and connections were hard-earned — and in a sport that was predominantly European — language barriers often hindered local research. When Nancy and Joe went to the university library to research cycling, they found a French magazine that covered the sport.

“We would look at the pictures and try to figure it out,” she said.

The Martins traveled the U.S. to visit other bike shops. They ordered their inventory via mail and telephone from Italy.

And, the entire operation was headquartered in Joe’s garage.

Joe called it the Stratta shop. He sold imported bike frames and parts and built bicycles for those who were interested.

What is now a national race came from humble beginnings. In the early days of the Fayetteville Spring Classic, cash prizes were few and far between. Instead, bike parts and other gear were given away to winners. Local honey, beer and soda were also gifted to the top performers.

For those first racers, money wasn’t the appeal.

What Joe knew, and what most riders will still agree with today, is that Fayetteville’s terrain is perfect training ground for competitive racing.

Joe and his cycling team, The Boston Mountain cyclists, traveled to Texas to train in the Tour of Texas. Joe and Nancy toured the country, gathering information to take back home, and all the while promoting the Fayetteville race.

Mark Blackwood, Joe’s partner in business, speculates Joe hoped to turn Fayetteville into a breeding ground for talented young athletes, hoping one would develop a passion for cycling and a talent big enough to go pro.

Joe himself was a category 1 rider, which is the highest level that can be reached before the pros. He reached this level after the age of 35.

“He was the Arkansas State champion for years and won numerous events as a category 1 racer and as a master,” recalled Nancy. Joe also competed in the National Cycling Championships in Milwaukee, Wis.

Steve Shepherd, who now works with a company that imports Spanish bicycles, began riding with Joe just after he became a master’s rider.

Joe was the ringleader, the coach and the motivator. He was also the organizer. He arranged for sponsorship of the cycling group as well as the race.

Living in Little Rock, Steve traveled to Northwest Arkansas for the occasional training session and for the Fayetteville Spring Classic. His first impression of Fayetteville confirmed all that Joe had sold it to be.

“I fell in love with the countryside,” he said. The course, which Joe had planned, was grueling and beautiful.

It was on such a trip to Fayetteville that Joe took Steve to Hugo’s for the first time, a downtown restaurant that Steve and his family still frequent when they come to town.

Ten years after he founded the Fayetteville Spring Classic, Joe Martin cut his hand while working on a bicycle in the shop.

His hand turned black, alarming his friends and family, and beginning a series of hospital trips and tests. Prior to the incident, Joe had reported feeling overtired, but he had attributed it to overtraining because he was participating in a kinesiology study for graduate students at the UA.

Watching his friend suffer from a mysterious disease was a great irony for Mark Blackwood, who said Joe was one of the healthiest people he knew.

Joe was eventually diagnosed with a rare form of leukemia. His friends and family had high hopes for his recovery after Joe’s sister offered her bone marrow for a transplant, but Joe’s body rejected the transplant.

His children were 2 and 4 years old.

“It was one of the most horrible things that happened in my life,” remembered Mark. “He was my partner. I had to deal with the personal and the professional loss. That was not an easy thing to do.”

“[Joe’s death] made me understand that things aren’t fair, and they don’t make sense,” said Blackwood. “Or if there is order to it, it’s very difficult to understand.”

Though Mark spent a lot of time with Joe during his final months, Steve Shepherd said Joe distanced himself from many of his other friends. Steve never got to say good-bye to his friend.

“We were friends with Joe,” he said of himself and the other cyclists, “all in our late 40s, still not feeling susceptible. It’s a shock to have one of our own, who’s an outstanding athlete, develop cancer and be gone so quickly. You realize how mortal you are, and the cloak of invincibility drops away.”

“I learned so much from Joe,” he continued. “I felt like a mentor had been taken away.”

Joe, for so many, was an inspiration.

Described by Nancy and Mark as an extremely driven man, Joe Martin’s ambition made him an excellent athlete, and his genuine charisma made him a great leader.

Today, 35 years after that first race, Joe’s spirit continues to serve as the hub of the wheel of a passionate cycling community.

After his death, the Fayetteville Spring Classic was renamed The Joe Martin Stage Race.

“It’s a great legacy to my children,” said Nancy, whose son and daughter return to Fayetteville for the race when they can.

The Joe Martin Stage Race has evolved from a mom-and-pop operation to a full-fledged national race, largely in part to Nancy Martin’s continued support and Bruce Dunn’s full-time commitment after Nancy retired from the Board.

This year will also celebrate the race’s 10-year anniversary on the national race calendar, the only event in Arkansas of its caliber and one of the premier events of the professional cycling tour.

“The four-day, four-stage race will offer more than $55,000 in cash and merchandise to competitors across 11 categories. This year planners expect 700 riders with approximately 1,500 support personnel for the four-day event. There will be riders from 20 countries and all 50 states.

Bruce has even bigger plans on the horizon, hoping to one day begin a Tour of Arkansas and to add an internationally televised race to Arkansas’ repertoire.

With 700 riders, the race promises to be a great spectacle — flashes of color as the bright jerseys whiz past, the sound of the cyclists’ bodies breaking the air and the grinding of chains and gears, and the whirring of rubber on asphalt — Mark described it all in detail.

But, to Mark, it is so much more than a competition or a spectator sport.

“The race is such an honor to my friend Joe Martin, and that is true in large part of what Bruce Dunn has done to make it the race that it is. He’s just taken it and kicked it up about 40 notches. What better way to honor Joe’s memory.”

“It’s started getting traction, and it’s a beautiful thing.”